Dandelions (and How to Turn Them Into Food) 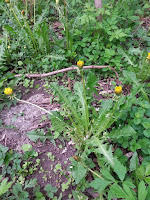 I kept telling myself I'd make dandelion wine, or learn how to cook dandelion greens, or really anything to get some free food from this plentiful weed... and then realizing that not only had spring passed me by, summer was mostly over and I should start looking at getting ready for canning season.

I decided that this year I was not going to (yet again) miss out on dandelion season. I did some web searching and found a few links that looked promising and got to work.

I called Bard and invited him over to hang out. He didn't know I'd be putting him to work so he was kinda surprised when I told him we were going to pick dandelion flowers in the park. It's an odd sort of date activity to be sure but we talked and laughed and had a great time looking like lunatics to the neighbours. When we thought we had a little over 4 cups it was getting late so we came back home to chill for a bit before I started the next phase.

The next bit was easily accomplished while watching part of Logan's run with my mom. Taking the flower petals in one hand I cut off the base of each flower and discarded it along with any green bits around the petals. I quickly figured out that I had way too many flowers. the petals are compressed in the head and when free of the base, they take up more room. I soon had a full 4 cups of petals and the bag of flowers didn't really look like it had been touched. I didn't really want to make a double or triple batch in case the first time didn't turn out well, so they got discarded along with the trimmings. 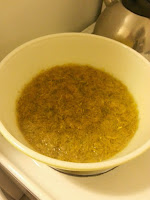 Phase 3: (overnight or at least a few hours til cool)

This part is easy, it just takes a bit of time and a heat proof bowl. Boil some water then add 4 cups of boiling hot water to the 4 cups of petals. Cover to keep out dust and let sit at least til cool. Do not speed up with fridge, you want it to steep. 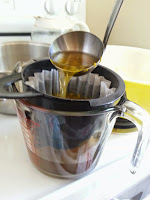 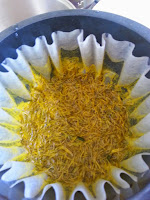 First thing to do in the morning is get the petals out of our lovely dandelion tea. I just reached right in and grabbed a small handful at a time and squeezed out as much as I could. After a couple of those it became almost impossible to grab another so it was time to strain the rest.

A coffee filter works really well to strain out the petals and pollen. I had to ladle it in at first and then slowly poured the last of it from the bowl.

It looks really cool... but yeah I definitely don't want to eat the pollen. 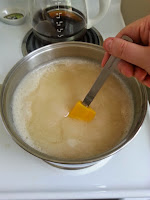 Here's where the magic starts. In a pot goes the dandelion tea, lemon juice, and pectin. Once it starts boiling, add sugar and stir til it comes back to a boil. Boil for 1-2 minutes more and take it off the heat to ladle it into jars.

I realized before I started that I didn't have a proper water-bath canner but the important part is keeping the jars off the bottom and completely covered in water. I figured I could manage these two things by using our potato pot with a squiggle of scrunched up tinfoil on the bottom. Once boiling, I set the timer for 10 minutes... and promptly realized I had no way to get these boiling hot jars OUT of the pot.  :-/
I figured out how to carefully scoop a jar out using two cooking spoons and put it on to of another jar so it wasn't IN the water, and then picked it up with oven mitts and put it on the cutting board. I did that for all of them and then the last one I just scooped out with the spoons like a big potato. Very dumb, very dangerous, do not follow my example. I will be buying proper jar tongs before next time.

All that's left is for the jars to cool in a draft free place then you can put them in your pantry. 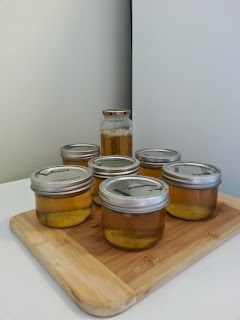 I only had enough room in the pot for five little jars so I had another little jar, and a random jar that didn't get canned. Since we were planning to eat some right away anyway I just refrigerated them. We'll make sure those two get eaten within two weeks, the rest will last in the cupboard for months.

I hope you've enjoyed this little peak into my messy kitchen and I look forward to more culinary explorations.

If you'd like to try your hand at dandelion jelly, I got my recipe from SimplyCanning and she's right about the taste.

What should I try next time? Let me know in the comments.