I decided that since I wasn't going to have a proper garden for a while I would grow us a bit of salad greens in the back room this winter. It has a window that faces west and gets a bunch of afternoon sun. Saturday we went to Canadian Tire and I picked up some 72 peat pod starter trays. 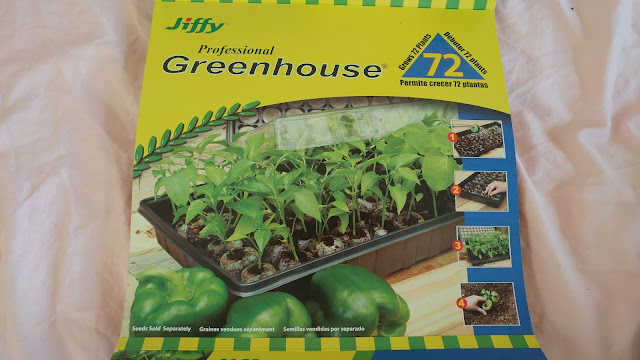 I knew I didn't want the plants THAT close together so I took out every other pod. This gives me about 2 inch spacing and that should do fine as long as I don't let them get out of control.

I watered them to expand the peat plugs and I started to wonder if the little planting plugs would be enough growing medium for the entire plant.

I had a pot of chives that had died and revived probably 5 times over the past year and I tossed out the plants to recycle the soil. There was only enough for gaps in one try so I'm seeing this as an experiment.

I realized at this point that I was going to put both types of seeds in both trays so I'd need some plant ID tags so I knew wtf was going on in a week or two. :-)  So I dug a yogurt container out of the recycling and chopped it up.

The tags in place, I planted the seeds in the trays. Half lettuce and half spinach. 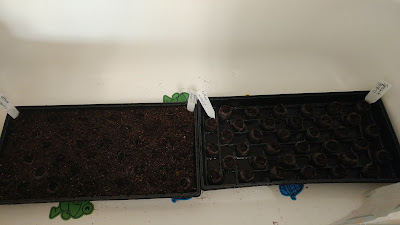 I popped the trays in the little greenhouse and crossed my fingers. Wish us salad.  :-) 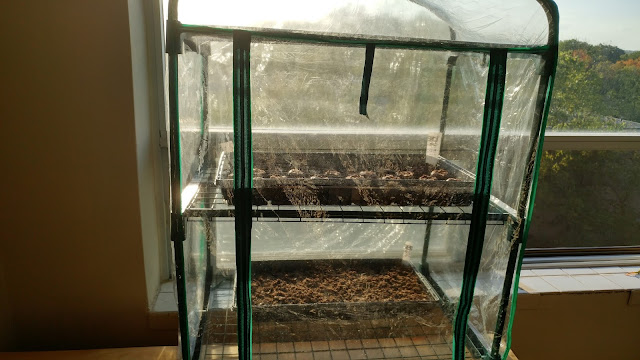