The Tidying, Has Begun.

This place needs decluttering. I know that I'm going to do some serious spring cleaning as soon as the weather is warm enough to open the windows for a few days. Until then, I still have plenty to do. In order to pare down to the things we actually want in our home, I've decided to start tidying.

I thought it was gonna be fairly easy to start with my clothes. . .  might take a day. . . One day I had an hour before dinner and decided to tidy my sock & undies drawer. I didn't think to take a before picture til I saw the pile on the bed, so you'll just have to believe me that it wasn't a disaster, but it was very full. 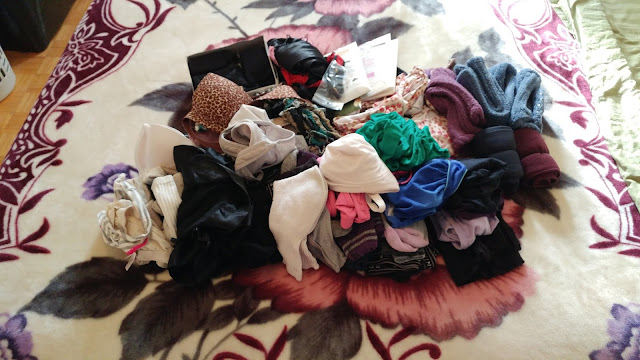 At that point I decided I had to post my underwear on the internet, and therefore, I needed pics. 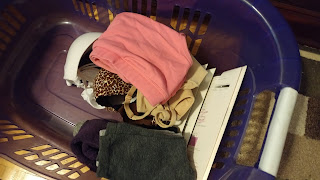 There were a few things I decided "don't count" because they belong in a sexy/dress-up pile (a pair of opera gloves, a garter belt, etc) so they went with other play stuff. I was happily surprised to see that it wasn't just keep and trash piles, but that some of the items were in good enough shape to go to another home. I even had a bunch of unopened pantyhose that I had got in a bag of clothes from a relative that went in the donation basket because they weren't my style.

All the socks with holes, and all the old thongs that are really not my thing anymore went in the trash. I just used the little wastebasket that was in the bedroom because honestly, I was kinda shocked how much I wound up throwing out.

At the end of the purge I KonMari folded everything I was keeping so it was nice and tidy. . . and now there's so much room in this drawer! Even after laundry (I know what's in the hamper I will still have a big hole with nothing in it!

That hole would fit a store folded t-shirt! I haven't figured out what might go in there yet.

That said, This ONE DRAWER took 90 minutes.
So, doing all my clothes, is going to take longer than I thought. 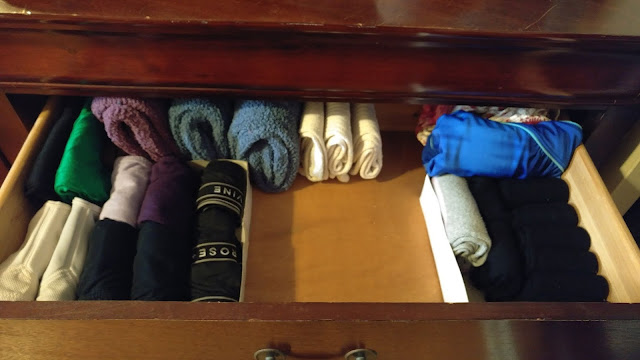