Garden Plan for the 2020 Season 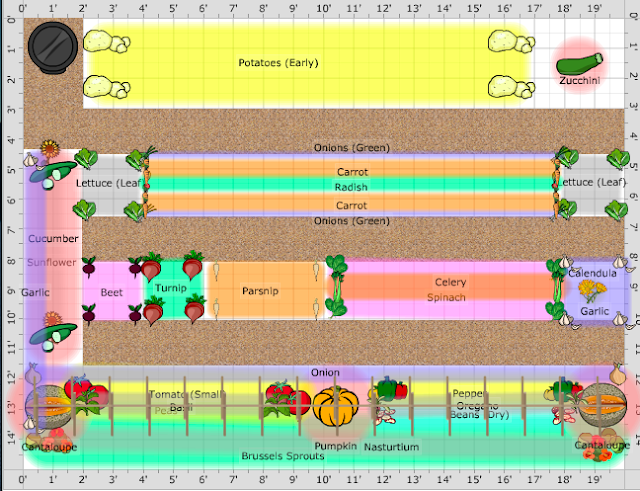 As you can see the plan is very crowded, with lots of interplanting and a LOT of different plants. (26 to be exact) This plan heavily relied on being able to get things in the ground as early as March. After learning about the flood and coming to terms with the actual land situation I'm working with, I looked ahead to the next couple months and...


As you can see, we're expecting the weather to dip below freezing until the beginning of May so the delicate things like the tomatoes definitely won't be going out til at least mid-May. Thinking of a shorter growing season and looking at the original plan I noticed that potato/zucchini area was where the mint was the worst last year and could probably use a longer period of time under the tarp, so I decided to move the heat loving crops to that end of the plot. Double checking on maps I found that end is actually the south face anyway and they'd probably do the best there.

With this new idea in mind, and trying to simplify my first ear instead of trying to do ALL the things, I rearranged the plan.

The left side where the garlic has over wintered(and is not covered by the tarp) will be the first seeds to go in. around the beginning of April. The quick crops of radishes, green onions, and baby carrots are the ones I'll be spending the most time on(harvesting and replanting often) so they're along the fence of my tidier neighbour. Her garden was weed free last fall and I want to not only be a good neighbour by keeping our "property line" tidy, but also take advantage of the lack of competition.

The next section to be planted will be the brussel sprout and potato bed along the bottom/north walkway in mid-April.

The middle two beds of leaves and roots will go in end of April to beginning of May.

And the heat lovers will go in the top/south bed Mid to end of May. 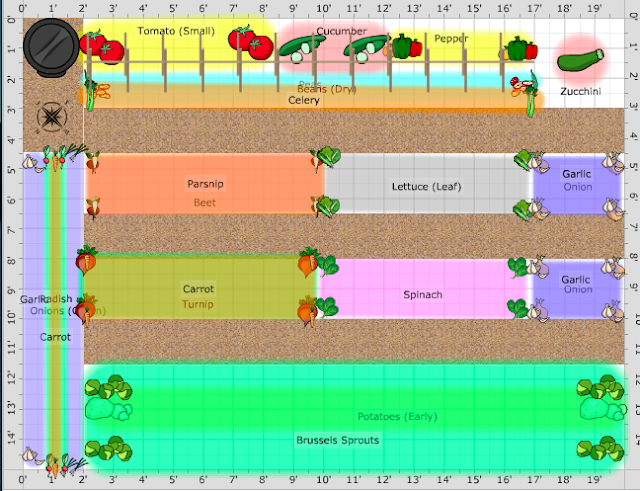 As you can see, the new plan is much simpler with larger quantities of the storage roots and less of a focus on large specialty items like melons and pumpkins which we use so rarely. Reducing the tomato and pepper plants by one each also allowed the cucumbers to be on the same trellis, eliminating the need for sunflowers altogether (which is great because I was worried that might not work well to begin with).

Simple, tidy, tasty. What more could I really ask for. :-)