So we've had a busy weekend. Friday after work we took a drive into Barrington Passage to pick up a tray of cookies and squares we had ordered from a local place called Dan's Icecream Shop(they also do really good wraps), and then to the grocery store for some party pop where met another neighbour. It seems it's really easy for folks to tell their friends and family to say hi to us when we drive such a distinctive car, lol.

After picking up 6 cases of pop and about 24 juice boxes (wanted to be sure of a variety and just... enough) we came home and I mostly just stressed(and showered lol). I was already to go in the morning but based on the number of people who seemed to be excited to come to our housewarming party plus about 1/2 of the rest we invited, we might have 50 people show up at the door. I've never hosted a party that big unless you count our wedding reception and I didn't have to cook anything for that.

Morning of Oct 1st Hugslut and I hopped into action setting everything up, and baking 7 chickens, and cleaning the bathroom one last time, and, and, and....

And then only two neighbours arrived.

One brought her two kids so there were 6 people in total including Hugslut and I meaning we definitely had enough chairs for everyone. They kindly brought some cards and a bottle of wine, and I was happy to get the chance to chat with them... but it was also impossible to avoid feeling disappointed for a bit.

As the night progressed I got a few folks who sent messages of being sick and such. Seems a bunch of folks on our street are home with bad colds. None of the other folks we invited called at all. One of our neighbours with a small baby just futzed on the date and promised to come by the next day. He brought us some blueberry wine and an adorable little fridge magnet. 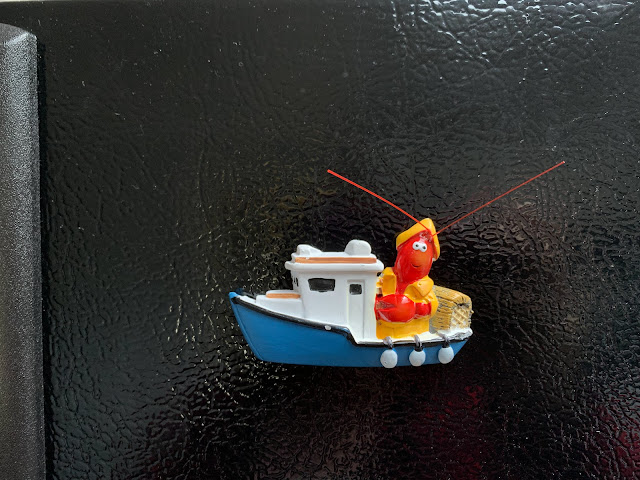 We sent the two that came to the party, and the belated guest who arrived the next day, home with as much of the party food as we could convince them to carry. Potato salad will not last a whole week and it would take at least that long for us to go through it by ourselves.

Yesterday night I traded the belated guest an entire chicken's worth of chicken pieces for some ham he was cooking up so we had some variety. That night and I dealt with the chicken we had left; about 5 chicken's worth, which was about 9.5 lbs deboned. I did not like the idea of tossing it all in the freezer as it might dry out, and it would definitely take up too much room in our fridge freezer... but canned chicken won't have that problem. :-)

The leftover pop will go to our halloween stash. We're planning to get chocolate bars and chips later. I remember being super psyched to get pop on halloween and I hope kids haven't changed that much.

Last night we went grocery shopping and then later, while talking with Mum on the phone, a buck wandered through our yard.  Now we see lots of deer but it's usually just the does and fawns.

This morning I woke up super early(5:50am) and I was just going to get some water and go back to bed but when I peeped out the window I was struck with how bright and clear the stars were. I watched the stars for a while and when the sky started to brighten for sunrise I got to cleaning the jars of chicken from the night before and starting my day. That said... it's only 11am and I am pooped. I think I'll go take a nap.