Woke up at 7 and got going asap. There was a medical emergency for one of the staff at an already short staffed Tim Hortons so our breakfast took a while. The manager looked a lot less stressed after the ambulance got there so the crew member will probably be okay.

We drove to the house and got there in time for the 9am inspection. We said yes we definitely wanted the house now please and thanks but we can’t have keys until the money moves from the bank through the lawyer to the selling agent.

With nothing to do but wait, we took our still loaded hearse to The Hawk and sat/walked around the beach til 10:30. 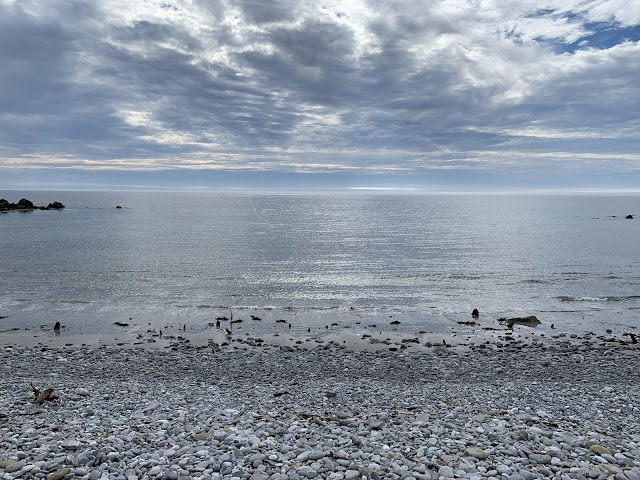 We drove around some more, considered going to the library but it doesn’t open until 3:30p on Tuesdays so we picked up some of the mail from the post office at 11. There was a big box with the pillows and sheets that we couldn’t take yet with the full car.

We went into town(Barrington Passage is about 15 min from the house) and got some gas and then lunch at Kat’s Lobster shack(kinda pricey so maybe just date night from now but what can you expect for lobster)… that’s when everything started happening.

Our RealEstate guy called to say the money finished moving and he could give us the code for the key box!  We hurried home and started unloading the car. It didn’t take as long as it did to load it of course, but that was just the start of the afternoon’s activities.

We picked up the big box from the post office, went into Barrington Passage again to pickup the bed frame I had ordered. We grabbed a few things while we were there like a broom and garbage bags and such, and when we went around to the warehouse door we found out that our lovely hearse could only take two of the three boxes for the bed. The headboard & footboard box was just too wide so that will be delivered on Monday.

The mattress I ordered was supposed to arrive at some point on the 16th but was a no-show so we tried to make a blanket bedroll on the floor. 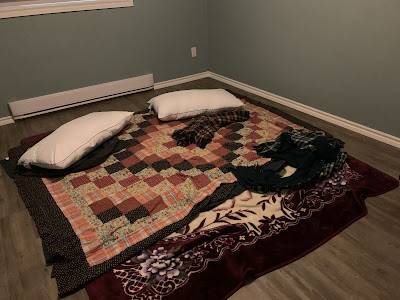 We gave up trying to sleep on that after an hour & slept in the car. (The front, not the back.)

We are technically all the way moved in. Now we will be removing traces of the past owner(like dog hair everywhere) and filling this house with stuff that suits us.