So not much happened this week beyond trying to get back into the groove of things after that mess of a weekend. I did a bunch of laundry washing all the blankets we had used as packing padding and have been sitting on the closet floor ever since. They're all clean and tidily folded in baskets now.

One morning as I was eating breakfast I looked up and saw this gunge. Now to me, that's a sign of trouble. 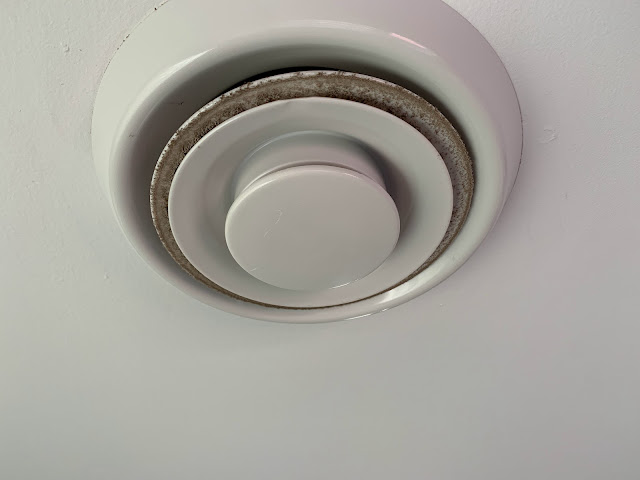 Putting on my gloves and such, I unplugged and opened the air exchanger......

I did some googling and found out how it works, what it's for, and how to clean it. The air exchanger is redundant for us right now since we have the windows open all the time, but what it does in the winter is allow you to keep all the windows closed but still get fresh air in.

It's a Heat Recovery Ventilation system so the cold air coming in goes through corrugations in the core (the white bit) while the warm air from the house is leaving through different corrugations letting the air get pre-heated on the way in, so you aren't just heating the outdoors in your search for fresh air. A handy lil device... shame the state it was in. 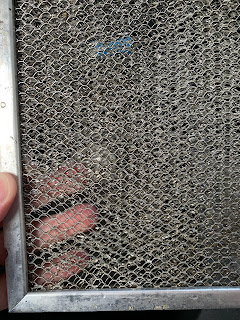 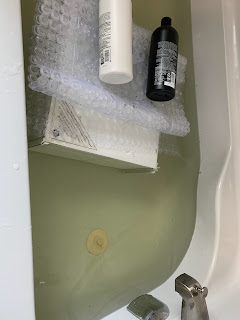 I cleaned the aluminium pre-filters (the dust filter was completely missing), and as I soaked the gunge out of the HRV core, I carefully removed the 1/2" of dust and mold on the door.

The aluminium filters were damaged so I ordered replacements and the door is supposed to have 1/2" of foam covered in foil as padding to seal everything from everything else which was missing... so the dust took it's place. Someone who didn't look it up had tried to seal the edges with some foam strips but the gap on the inside basically made this thing about 1/4 as useful. Maybe less.

I have contacted a duct cleaning company to clean out the ducts and we should have this back up and CLEANLY running by winter. At the very least, having it turned off and not spraying spores at us should be a good thing.

Tonight after dinner, Hugslut and I took a walk down the road to introduce ourselves and invite our neighbours to a housewarming party Oct 1st. We didn't manage to catch as many people at home as I had hoped but we left invitations for those who weren't there to take them in hand.

In general, our lifestyle has been a but more physical and we're both feeling really good. I mean neither of us are athletes or anything but all the walking and such is doing us good.

Tomorrow is a thing in town where they're gonna have a bouncy castle and hotdogs so we're gonna show up and try to meet more people. :-)