I don't know if we have been eating healthier, but it kinda seems like it to me. Maybe not, but yum. 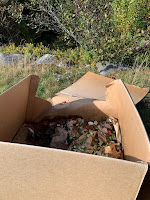 The other day before the storm I noticed that the side of my compost "bin" had been torn open. It doesn't look quite as clear anymore but I think it was a deer who stepped in and their body just tore it, and from there it gets more torn.

I'm... okay with this... for now. I mean I didn't really expect the cardboard box to withstand the entire winter, but I don't have a proper containment area yet.

It's gotta be downland from the well, close-ish to the house/future summer kitchen, and also far-ish so any stinkiness doesn't waft into the windows.

Not really sure where yet. 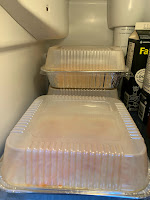 I made a batch of mac and cheese so I could chuck it in the oven the day of the housewarming party.
There's three 8"x8" pans. I have NO clue how many people are going to show up so I just hope its enough.
I'm also going to be cooking up potato salad, a buttload of chicken as well as roasted potatoes/carrots/brussel sprouts/onions.
We're also gonna have some sweets from a local shop and a bunch of soft drinks......
I mean I'm fairly sure at least 5 people are coming..... I just don't know if it's gonna be 50.... or maybe more? Eek.

I’ve started thinking of my kitchen in the same way as a games room.

If you’re playing chess and the game ends... you don’t get sad or annoyed that you need to reset the board before playing again. No, you’re thinking about the game you just played and perhaps what you want to do in the next game.

Same with a games room. You just finished playing a board game and the pieces are everywhere. You don’t mope about putting it back in the box. You just reset the room so you can play a new game without the old game getting in the way.

Same thing with my kitchen. I finished prepping some pans of mac and cheese. I didn’t whine and stomp about having to do *chores* like washing the dishes. No, I just reset the space so I could carry on with making some lunch and an apple glaze.

The reset instead of chores mindset has helped a lot.

On Friday Hugslut and I went down to the waterfront and said hi to the ducks. I'm still trying to weigh chickens vs ducks for our homestead. Leaning towards chickens, with ducks in the future. 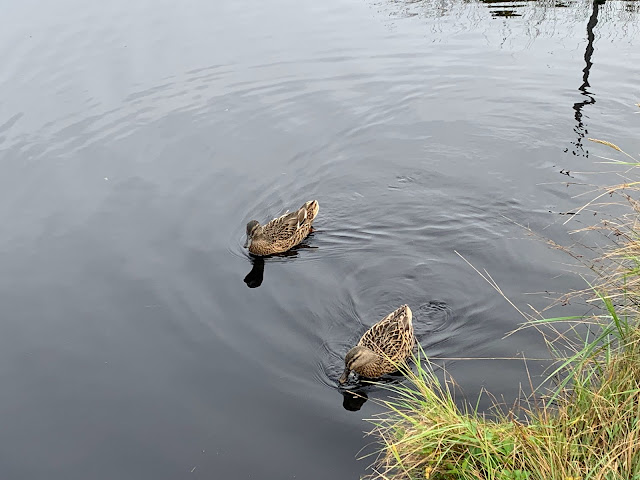 Also tried my hand at canning beans today. Just three jars as I hadn't done anything like it before.
We'll have to test how mushy they are and I'll have to try with other types, but it seemed to go well. 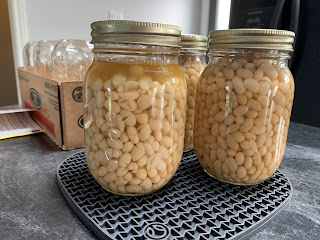