Happy Autumn folks! So um....
I found out yesterday at lunch that a hurricane is headed this way... and the weather network is telling us to hurry up and get prepared before it hits Thursday evening because it's gonna be strong enough to throw loose stuff around your yard and the power might go out so make sure you've got emergency supplies!

So of course that means yesterday afternoon I ran around cleaning up the scrap wood into the shed and undoing the garden cardboard. I also got out the instruction manuals for the generator and the GenerLink(which is the device that connects the generator to the house). There's gas and oil in the generator, and it's strong enough to run the fridge, and water pump/filter, plus charge some electronics like our phones so we won't be at a lack of info as long as there's cell signal.

Hugslut was working and warning her work she might disappear for a few days. The shed door blew off at 30-40km/h. This storm will bring winds >100km/h. I am so glad we had the opportunity to fix it before the storm. Here's the details I have so far:

This storm is shaping up to be a potentially severe event for Atlantic Canada and eastern Quebec. Numerous weather models are quite consistent in their prediction of what we call a deep hybrid low pressure system, possessing both tropical and intense winter storm properties with very heavy rainfall and severe winds.The latest forecast guidance brings Hurricane Fiona North towards Nova Scotia waters Friday night, passing through eastern Nova Scotia and Cape Breton Saturday, and then reaching the Lower Quebec North Shore and Southeastern Labrador early Sunday.

a. Wind.
Most regions will experience some hurricane force winds. These severe winds will begin impacting the region late Friday and will continue on Saturday. Similar cyclones of this nature have produced structural damage to buildings. Construction sites may be particularly vulnerable. Wind impacts will likely be enhanced by foliage on the trees, potentially causing prolonged utility outages

b. Rainfall.
Rainfall will be significant, especially north and west of Fiona's track, where heavy rain could lead to flooding. The highest rainfall amounts are likely for eastern Nova Scotia, southwestern Newfoundland and the Gulf of St. Lawrence region. Forecast guidance is suggesting widespread amounts of 100 to 200 mm, but closer to the path of Fiona, more than 200 mm is likely. Some districts have received large quantities of rain recently, and excessive runoff may exacerbate the flooding potential. Road washouts and erosion are also possible.

c. Surge/Waves.
There will also be some rough and pounding surf, especially for parts of Nova Scotia and Newfoundland. Large waves will reach the eastern shore of Nova Scotia from the south Friday night and build to more than 10 metres. These waves will likely reach southern Newfoundland by Saturday morning. Some of the waves over eastern portions of the Gulf of St. Lawrence could be higher than 12 metres, and the western Gulf will see waves from the north up to 8 metres in places, which will cause significant erosion for north facing beaches. Iles-de-la-Madeleine will also see some coastal erosion from waves.

Storm surge will also be a threat for parts of Nova Scotia, Prince Edward Island including the Northumberland Strait, the Gulf of St. Lawrence region including Iles-de-la-Madeleine and eastern New Brunswick, and southwest Newfoundland. The highest risk for coastal flooding will be a combination of storm surge with large wave moving onshore. There may also be some coastal flooding for the St. Lawrence Estuary and the Quebec lower north shore. For most areas the highest water levels will be near high tide some time on Saturday morning.

Hurricane force southeasterlies should spread into Scotian Slope waters Friday evening, and these winds will persist near and south of the track. As the storm moves into the Maritimes, storm to hurricane force northwesterlies will likely develop west of the storm track. Waves in excess of 12 metres should form east of the hurricane track, beginning Friday night. These large waves will likely reach the south coast of Newfoundland early Saturday, and parts of the Gulf of St. Lawrence later in the day.

This might turn out to be nothing for us,

but I'm glad we're as prepared as we can be. 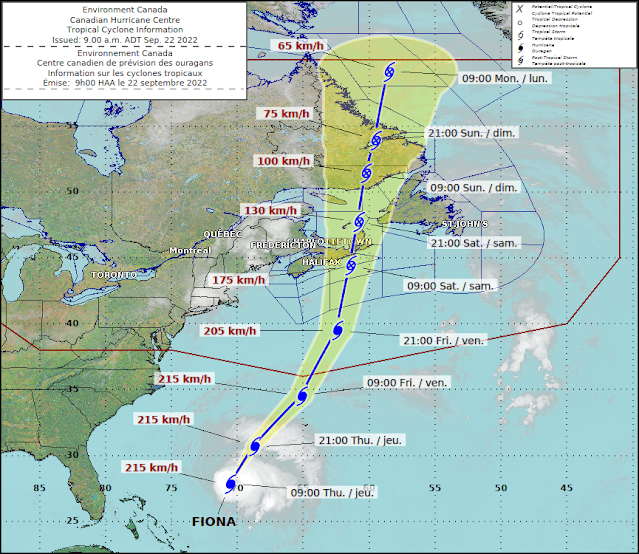